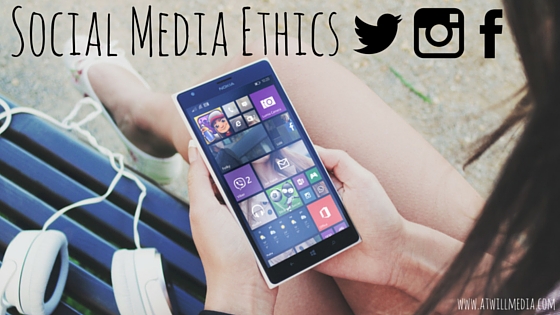 When social media first burst into the mainstream with Myspace, it was a new frontier that had mostly been unexplored by a wide majority of people. It was a lawless medium where you could tell hordes of random people all of your deepest thoughts or maybe just what you had for lunch that day.

Because most people had never experienced the kind of freedom of expression and opinion that they could on social media, there was no real set of ethical laws that governed it. But just like anything else in this world, there should be, and are, ethical laws that keep people from overstepping their boundaries and committing unethical acts that they will later regret.

A list of ethical rules should also hold businesses accountable for their online actions. In fact, businesses should be the ones that are the most interested in the ethics of social media, since they’re constantly in the public’s eye. People are always waiting for them to make the next big slip up.

If you’re worried about the ethics of social media, and how you and your business should interact with others online, check out some of these awesome tips!

Don’t Give Out False Information

Every business owner should know that you shouldn’t fabricate stories to make yourself seem better or another rival business look worse. That’s called libel and it has serious legal ramifications. But what I really mean here is that you shouldn’t tell people false information related to your sales numbers or profits, and don't make product claims that are false. This builds distrust between the consumer and your business.

Be sure to check the copyright laws on a picture or video you are sharing, especially if you don’t give credit where credit is due. Social media laws about including a copyrighted picture in a post are a little more lenient than other places, but it’s still always a good idea to avoid any questions of improper use. There are plenty of websites out there where you can find Creative Commons licensed pics to use, so take advantage of those.

This is a no-brainer, but avoid disclosing anything about the inner workings of your company, such as an employee’s personal home or email address. Any information that could come back to harm you should be kept off of social media, even in private messages.

Don’t Show Favoritism Toward One Individual

It’s easy to show favoritism toward a star customer, especially when that customer is a strong, outspoken advocate of your business. But if other customers catch wind of you treating one customer more favorably than them, they will soon lose interest in your business and accuse you of playing favorites. Treat all customers equally when you’re answering their comments on your post or when they tweet at you.

The same goes for jokes and slang words. Don’t post inappropriate or “dirty” jokes and avoid any type of slang that might be deemed offensive. Know your audience, and know what they think is appropriate material before you post anything.

Although some people love to get into a good debate when hiding behind the safety and comfort of a computer screen, posting anything political or religious is a good way to get people angry at each other and your business. Unless you feel comfortable being an advocate for a certain belief or cause, keep your personal beliefs to yourself and off of your business's social media page.

Be cautious about what you choose to post on social media, because there will always be people out there who will try to use it against you in order to tarnish the reputation of your company. When in doubt, always stop and think before posting!

Contributor Caleb Hennington is a 23-year-old writer, who manages the Atwill Media and FGmarket blogs. He graduated from Arkansas State University in 2014 with a bachelor's degree in journalism.